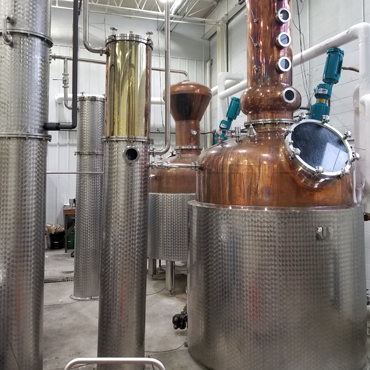 Vodka, Gin, Bourbon and Rye, oh my!! In today’s market, if you find yourself in a decent liquor store, you’ll encounter a plethora of these spirits on the shelf. Certainly much more than there was even five years ago. So what is a new distillery to do? Gin and Vodka used to be the standard component of a distilleries business model because they could be bottled and ready for distribution in roughly ten days from when the grains arrive. But now, the competition is at its most competitive peak, and is the ideal time to think outside the box.

Botanicals are one category to showcase some creativity and ingenuity. While Gin may be the darling and most popular option, there are an abundance of botanicals to experiment with for a master distiller with a creative side. The Spirts of French Lick in West Baden, IN has an award winning Aquavit in their portfolio, in addition to an Absinthe distilled in the Swiss style during the prohibition of this misunderstood spirit, and contains 13 botanicals. St, George Spirits in California released the first legal American absinthe after the U.S. ban was lifted in 2007, and several others have followed suit. Leopold Bros in Denver, CO, has an Absinthe Verte that is produced following the traditions of 19th Century European master distillers, starting with a grape distillate base (imported Chilean Pisco), and adding the required ingredients to constitute absinthe: anise seed, fennel, and grande wormwood. Other botanicals are also added to the small batch. One distillery, Castle & Key in Frankfort, KY, has shown some diversity and creativity within the Gin category by creating seasonal gins. Each year, a seasonal gin will be released, featuring botanicals from the different season. No two will be the same, creating a collectible, and ensuring said creativity.

Brandy has a long, and storied histories in this country. In 1780, Robert Laird recorded the first commercial transaction at the distillery in the tiny community of Scobeyville, NJ, and prior to 1760, George Washington wrote to the Laird family requesting their Applejack recipe. Kentucky, long regarded as the bourbon capital of the USA, has a long history of brandy distilling, thanks to its abundance of apple and peach trees. While there was a whiskey boom following the Civil War up to prohibition, there were roughly 450 dedicated brandy distilleries in the bluegrass state, probably small pot stills where there was an orchard. Another 100 or so whiskey distilleries were also making brandy, and many of the well-known whiskey merchants such as W.L. Weller and Sons, Brown-Forman, and Bernheim Bros. all had fruit brandies in the portfolio. Copper & Kings in Louisville, KY brought brandy distilling back to KY.

Between 1855 and 1914, more than 150 Southern Indiana apple brandy distilleries once roamed the landscape along the creeks, tributaries, and springs that still trickle with limestone water in the southern tier of the Hoosier state. One Artisanal Distillery, Spirits of French Lick, sought to restore some Hoosier history as well with their Old Clifty Apple Brandy, named for the Old Clifty Distillery. Knowing that brandy distilling can be significantly different than that of whiskey distilling, I asked their Master Distiller Alan Bishop if he’d share some of the production techniques behind Old Clifty. “For Old Clifty we use a low temperature brandy/wine yeast called OKAY, we ferment at 67 degrees for 14 days. We adjust pH between 3.2-3.5 to capture bright aromatics. We double pot distill. One stripping run with no cuts made, just collecting the alcohol and a spirit run where I make a fores, heads, hearts, and tails cut. The fores and heads are discarded, the tails are rerun in the doubling still with the next batch. We save and retain the “sweet water” from below 20 proof for proofing the spirit. We blend the matured barrels and tank age in stainless where we can aerate and proof down very slowly.” Germain-Robin and Osocalis are craft distilleries located in California who are making stellar brandies that would make Europeans proud.

Dozens of rum distilleries were established in the colonies, built upon the trade from the West Indies, but declined in the 1800’s as the popularity of whiskey rose. Today, for the first time since the eighteenth century, you can once again find hundreds of distilleries producing rum across the United States. With over 250 rum producers in the United States, I ponder the question: “Why the sudden fascination with rum for so many American distillers, when the Caribbean and Latin America has such a stronghold on the category?” For many, it may be an additional SKU to their portfolio, and another shelf option to whiskey and gin. But if that’s the case, how much do they really care about the rum, or the quality? “Look, we’re making rum now!”

The flip side to that are those who have a genuine passion for rum, who love rum, and love making rum, like Maggie Campbell, President of Privateer Rum. Privateer Rum, located in Ipswich, MA, is reviving the tradition started by their founder’s ancestor, the original Andrew Cabot (1750-1791), who was a merchant, rum distiller and successful American privateer during the American Revolution. “Our Amber rum begins with our base ingredients: Grade A Molasses and Real Boiled Brown Sugar (created by simmering pressed cane juice, we do not use brown sugar that is made from colored white sugar).  We add these sugars to warm water, then add cool water bringing the temperature to 74F. Then we mix in a proprietary blend of yeast selected especially for our Amber rum.  After fermentation the liquid is referred to as ‘wash’ and it no longer has sweetness, and is in fact quite tart at a pH near 4.  Instead it tastes of almonds, brown butter, toasted hazelnuts and figs.  It finishes fermentation at about 8% abv (alcohol by volume).

One of the ways we break with tradition is to ferment for longer at a cooler fermentation temperature. Rum was traditionally a rushed spirit that was fermented at around 105 degrees in 24 hours (whiskey is about 5 days at 80 degrees). When yeast are in such a hot environment they may work more quickly, but they also are more stressed, releasing damaged and unremarkable flavors into the wash. By giving them a perfect home at 74-78 degrees, we allow them to thrive and produce more desirable flavors.  We also ferment for 6 days. Most of the sugar is converted to alcohol in the first 48 hours, but the mingling of the yeast with the wash after this period gives richness and complexity to the spirit, just as it does in whiskey, wine and beer.”

“Distilled Spirits Specialty” is a lesser known class recognized by the TTB that really opens the door for some creativity and ingenuity because, by its very definition, is non-standard.

Glenns Creek Distillery, located in Frankfort, KY, has one such product, Hamilton Smoke, which is distilled from grain, cane, and peat smoked barley, with some hickory wood flavors added. I spoke with Dave Meier regarding the thought process leading up to his creation.

“As a small distiller located in the heart of bourbon country, I knew going into this venture that there were several things we would need to be able to do to be successful. First is to be able to distill and mature fantastic bourbon! We can’t compete with the large distilleries on volume, price, distribution, or placement in retail stores, so we had to create great products that did not fit in the traditional flavor profiles available. Second, we have to provide an experience with our tours and products that people will not find at the larger distilleries. We do not have tour guides, so our tours are given by the people who build the equipment and operate it, and can explain the process in detail. Because everyone who works here does all of the production operations, we all help create new products. Each of the new products we have created has been a collaborative effort.

We had started production of a malt whiskey and had a similar idea to make a Hamilton product that was reminiscent of malt whiskey. The result became Hamilton Smoke. We add additional peat smoked barley to the mash for a smokier flavor. Along the way we had a visitor come in who was doing some experimentation with vodka and hickory wood from his restaurant. We tried his concoction and thought that the hickory might be an interesting addition to the peat smoke flavor. He was kind enough to bring us some nicely charred logs from his restaurant and we began to test the amount of hickory to add to give the product a hint of hickory smoked bacon, but not too much.”

Although “Moonshine” has also filled the shelves in recent memory, and rivaling Vodka with the choice of flavors, one distillery, Neeley Family Distillery in Sparta, KY, has taken it a step further by creating a Chocolate Truffle Moonshine Cream Liqueur. With an outstanding moonshine base that’s triple distilled from corn and cane following a longer fermentation, it then has natural cream, vanilla, walnut, and chocolate fudge flavoring added to complete a cream liqueur that rivals any on the shelf today.

While Bourbon and Rye Whiskey may be the darlings right now because of the boom that we’re still riding, the United States has a deeper distilling history than just those, and I for one am thrilled to see some craft distillers creating outside the box, and well!!!